Dr. Schofield is a graduate of the Palmer Chiropractic College where he studied NUCCA, The Pettibon System, and S.O.T. (Sacro Occipital Technique). Since opening their practice, he has earned certificates in Orthospinology (An upper cervical or atlas chiropractic technique), The Biomechanics of Low-Speed Impacts & Injury Mechanisms, and Whiplash & Brain Injury Traumatology.

Dr. F.J. Schofield was born in Holland, Michigan and raised in Phoenix, Arizona. His father was a world-renowned chiropractor and his mother was a nutritionist and herbalist. Together, they taught him the importance of a holistic and drug-free lifestyle. Dr. F.J. grew up loving sports and excelling in tennis, leading him to attend Florida Atlantic University on a tennis scholarship.

Dr. FJ was playing college tennis at Florida Atlantic University, down in Boca Raton, Fl. (Living a Mile from the beach!!!) He was living his dream of playing a college sport and having a successful Freshman Year. Winning most of his matches and doing well in class - everything was great.

Then towards the end of the regular season, he was playing a match at the University Of Central Florida in Orlando. During his singles match, his life changed forever.

Dr. FJ went back to hit an overhead and his back lit up with pain. He continued to play and ended up losing the match. After the match, his back continued to get tighter and tighter. The pain continued to get worse as well. Dr. FJ, like most people, thought the pain would go away. Eventually, he could no longer play because the pain was so bad.

He went to his trainer who did ice, heat, electric stimulation, ultrasound, and massage, but nothing worked. He could not sleep at night, could not sit in class comfortably, and was miserable all the time.

This experience taught him one of the greatest lessons of his life, if you don’t have your health and feel good nothing else matters. A few months earlier he had been living his dream and now he was angry and exhausted all the time. One night Dr. FJ laid in bed and cried because he didn’t want to feel this way anymore.

Finally, the semester ended. Dr. FJ went home and his dad, a chiropractor, evaluated his back. He adjusted a few bones in his back and Dr. FJ finally had some relief. He always thought he would be a chiropractor, but that experience made him extremely passionate about helping to ease people’s suffering.

Fast forward 8 years. Dr. FJ opened his chiropractic office in West Bend with his wife, Dr. Korie. Dr. FJ had found that if he got a standard chiropractic adjustment every 2-4 weeks his back was okay, but it was never fully fixed. About 6 months after opening his practice the pain quit going away. Dr. FJ was getting adjusted 2-3 times a week and was still having pain. He saw the same experience with his patients after a standard adjustment. They would feel great for a day or two, but then they would need to get adjusted again. 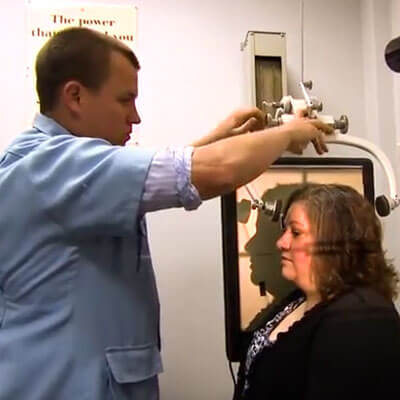 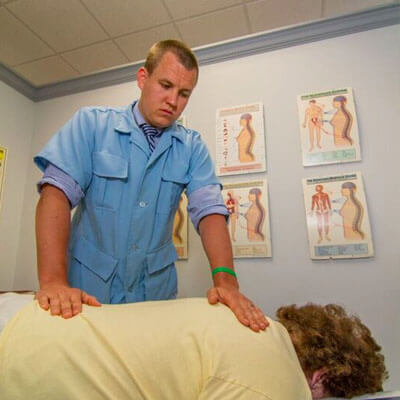 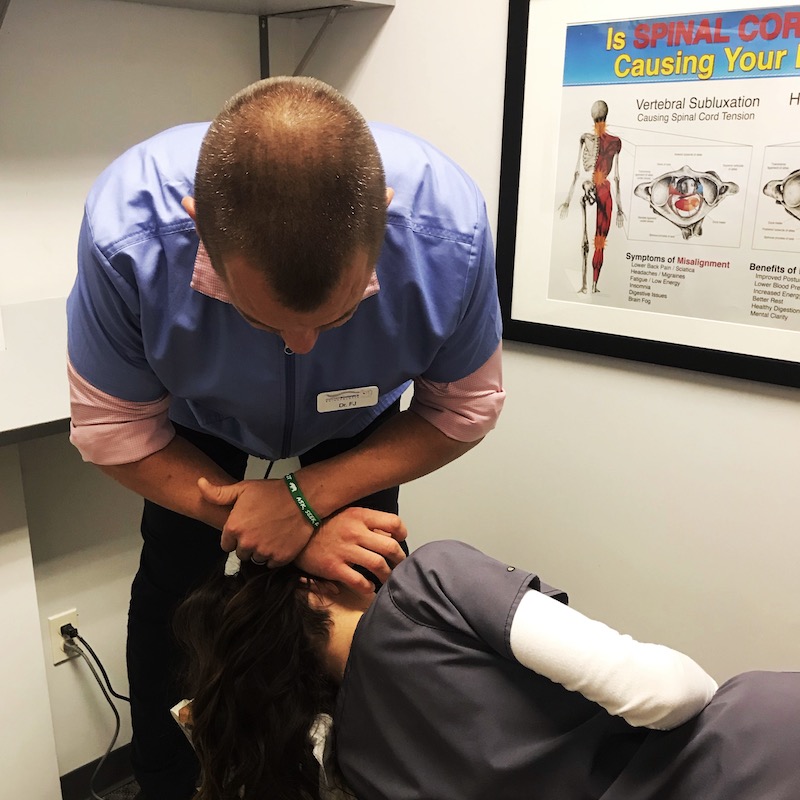 This is when Dr. FJ realized he was wrong. He thought if you got the spine moving and released tension it would find it’s proper alignment, but that was not happening. Many of his patient’s x-rays were not improving, their posture was not changing and most importantly their problems many times were never completely going away.

It was around this time that Dr. FJ went to a W.I.N. networking meeting through the chamber. A lady told him she drove all the way to Tomah, WI to receive a NUCCA adjustment, and that is the only thing that fixed her sciatica. She had tried regular chiropractic, medical doctors & physical therapy, but nothing had helped her.

After going to many seminars, Dr. FJ received his first Upper Cervical Adjustment at an Orthospinology seminar in Atlanta and his pain went away completely. Dr. FJ held that adjustment for over 6 months. He immediately signed up and was trained in Orthospinology. After a few years of using their instrument, he decided to learn NUCCA, a similar Upper Cervical Chiropractic technique that uses the hands to gently correct the body’s alignment.

Dr. FJ realized his mistake. Before, he was not understanding how the body worked. Individual bones can’t mis-align without the entire body going out of alignment because they all move together. You can adjust an individual bone to release tension, but the only way to correct alignment is to center the head over the neck, and neck over tailbone.

This correction will level out the shoulders and hips, removing pressure on the nerves in the upper neck that control postural muscles, heart, lungs, and many other organs. By improving how your body moves through gravity and how the nerves function, Upper Cervical Chiropractic techniques like NUCCA have been shown to help with chronic pain, Fibromyalgia, Neuropathy, Asthma, Migraine’s, Vertigo, Headaches, knee pain, shoulder pain, and much more. 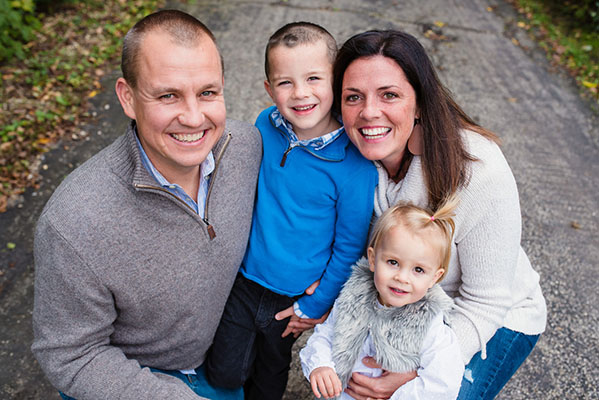 Dr. Terry is Webster Technique certified and continuing post-graduate studies with the International Chiropractic Of Pediatric Association (ICPA), focusing on working with children, pregnant mothers & families. She is a Wisconsin native and has a lot of family near West Bend.

In her free time, she enjoys staying active outdoors, exercising, playing sports, fishing, being out on the lake, and anything Packer-related!

Dr. Terry was first introduced to chiropractic after a shoulder injury playing high school basketball. She continued to shadow her chiropractor into college and fell in love with chiropractic’s inside-out approach to health & wellness. Dr. Terry attended undergraduate college at the University of Wisconsin-Whitewater, where she graduated with a Bachelor of Science. She completed her Doctor of Chiropractic degree from Palmer College of Chiropractic in Davenport, Iowa. During her studies at Palmer, Dr. Terry was nominated by her professors and clinic doctors for the Clinical Excellence Award.

Dr. Terry has always had a passion for working with children and has carried that into chiropractic. She is Webster Technique certified and is continuing her post-graduate studies with the International Chiropractic of Pediatric Association (ICPA), focusing on working with children, pregnant mothers and families. After extensive studies and a thorough examination process, Dr. Terry will soon receive her certification through the ICPA. Dr. Terry has also continued her postgraduate studies in Activator Technique. She has since become Advanced Proficiency Rated through Activator Methods. Throughout her studies and postgraduate education, Dr. Terry has gone on to study and utilize techniques in soft tissue therapies and modalities.

Dr. Terry is a Wisconsin native and loves being able to practice in her home state. In her free time, she enjoys staying active outdoors, exercising, playing sports, fishing, being out on the lake, and anything Packer-related! 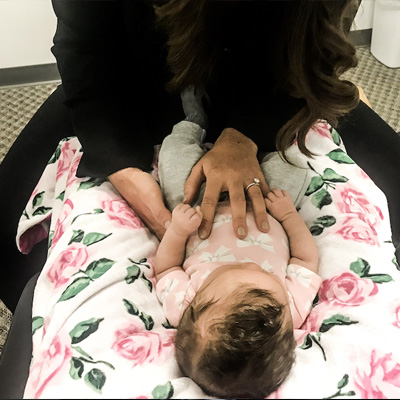 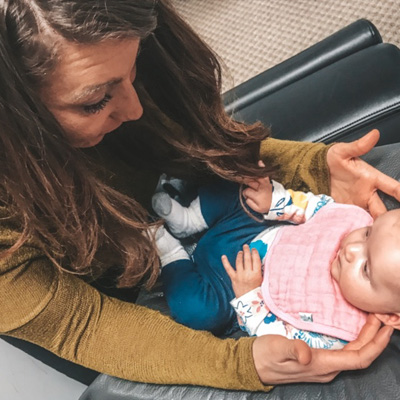 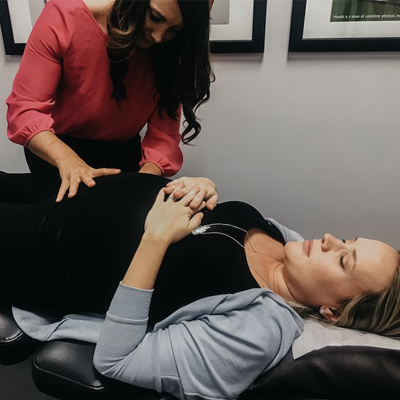 Dr. Josh is a 3rd generation chiropractor, born in Utah and raised in Indiana. While in undergrad, Dr. Josh studied math and physics but became intrigued with chiropractic after seeing several miracle cases from his dad’s clinic in Indiana.

After moving to Davenport, IA to attend Palmer College of Chiropractic, Dr. Josh was introduced to the NUCCA Technique and has never looked back. When Dr. Josh is not in the office, he is usually out exploring his new home of Wisconsin, with his wife; Brittany, and 3 kids; Harper, Ellis, and Emerson!

Dr. Josh is a 3rd generation chiropractor, born in Utah and raised in Indiana. While attending school at Palmer College of Chiropractic, Dr. Josh struggled with severe back pain, daily migraines, and atrial fibrillation, nearly forcing him to withdraw from classes. His conditions led him to search for something that would help. After trying traditional chiropractic techniques, Dr. Josh was frustrated with no results and questioned if chiropractic care even worked. He was ready to quit chiropractic school when he was referred to a chiropractor in Wisconsin who practiced the NUCCA technique.

Unlike the typical techniques, the visit took several hours and required very specific x-rays. After drawing lines on the films and doing what appeared to be mathematical calculations, the doctor said “OK, let’s go fix your problem.” There was no twisting or cracking. About 10 minutes after the adjustment, Dr. Josh was required to rest for 2 hours. While resting, he kept thinking to himself “Did anything actually happen? I hardly felt anything.” He was expecting something with more bells and whistles during the adjustment.

Over the next several months, Dr. Josh was checked by the NUCCA chiropractor in Wisconsin and continued to hold his original adjustment. “My migraines and my back pain did not change at first. It took about 2 months of healing. The first thing I noticed was that my heart palpitations became less frequent and then completely disappeared. Then the migraines became less frequent and eventually disappeared. Then finally the back pain disappeared.” To this day, Dr. Josh still has not had a migraine or atrial fibrillation.
After 5 months of being pain-free, Dr. Josh had his wife and 3 young children all under NUCCA care.

“AFTER BEING TREATED, I REALIZED THE VITAL IMPORTANCE OF WHAT NUCCA WAS DOING. EVERY PERSON SHOULD EXPERIENCE THE HEALING EFFECTS OF A NUCCA ADJUSTMENT.”

Dr. Josh quickly began his NUCCA training while still in school and practiced NUCCA exclusively while working in the Palmer Clinic. Dr. Josh is eager to serve the West Bend community with NUCCA and change lives the way he and his families were changed.

I joined the Gardner Schofield team in March of 2016. Before becoming GSC’s Office Manager and Insurance Specialist, I was a patient of Dr. FJ’s. Dr. FJ completely eliminated my daily headaches with his unique approach to chiropractic care.

I was very excited about a job opportunity in a field I was very passionate about and believed in. My duties at work include managing the behind-the-scenes tasks, bookkeeping, assisting patients' needs, and all insurance correspondence. Outside of work, I enjoy rummaging, camping, and spending time with my husband and 2 sons; Bentley and Holden!

I started at Gardner Schofield Chiropractic in August of 2020. My main job here is to be the friendly face behind the counter ready to greet patients and help them schedule appointments.

Some other duties I have include keeping the office organized, insurance verification, and data entry. In my free time when I am not working, I enjoy cooking and canning, kayaking, and going up north with my fiance and our dog.

I began filing for Gardner Schofield Chiropractic in 2018 and have since moved into also helping out at the front desk as an office assistant. I am a junior at West Bend East High school and am involved in Tennis, Gymnastics and Track. Outside of school and work, I like to hangout with my friends and family and play with my dog. We also have a cabin up north that I love to go to.

I began at Gardner Schofield Chiropractic in April 2021. My main duty is to provide friendly service to patients as well as schedule appointments. Other duties consist of data entry, insurance verification, and office organization. In my free time, I enjoy spending time with my husband and two puppies, Bennet and Beau. I also enjoy reading and spending time with family and friends.

Saturday
By Appointment Only